Our Covid-19 response. The health and safety of our employees, guests and community are our top priority. READ MORE
Close 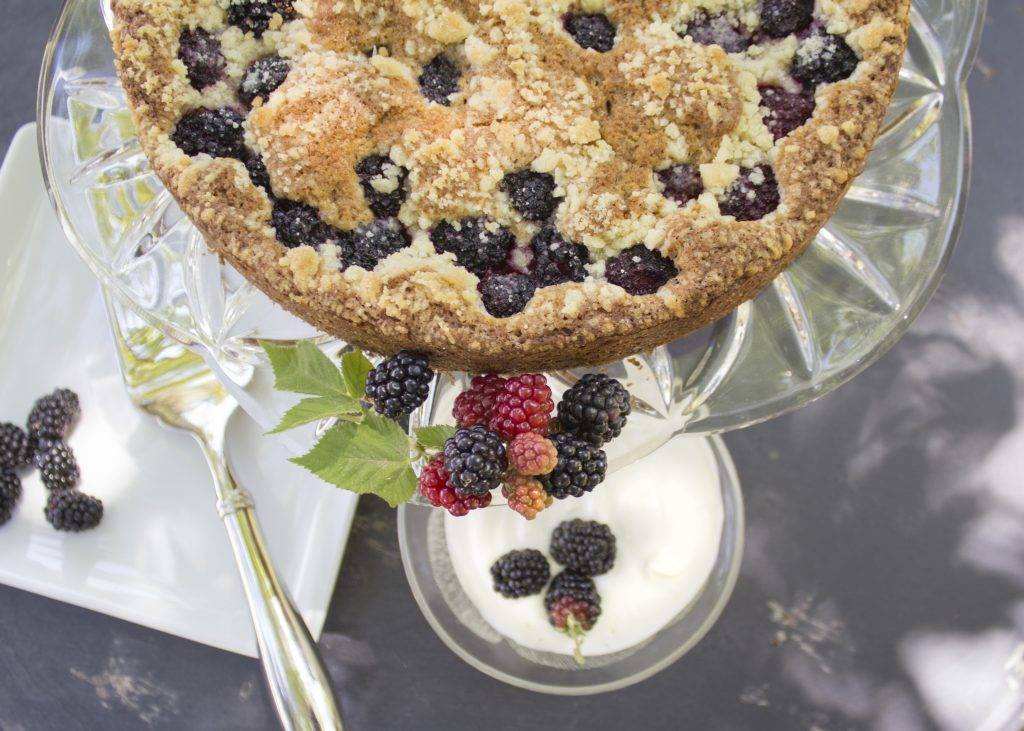 All across the farm, we have little blackberry brambles tucked here and there between the heirloom roses, fruit trees, figs, and wisteria vines. For most of the year they go relatively unnoticed compared to their flashier, more prominent counterparts, but come July and August when the berries start shifting from vibrant crimson to lovely deep, dark blue-violet, the blackberries become the star of the show. Often, in the early mornings, our pastry team can be found in the gardens harvesting the ripest berries for use in the kitchens. They stand out, attired in their crisp chef whites.

This week we are sharing Chef Perno’s recipe for Blackberry Buckle, a celebratory little summer dessert that highlights the bright, beautiful flavor of one of our favorite summer berries. Though they are a unique type of pastry, buckles are often compared to coffee cakes and crumbles because of their cake-like texture and sweet streusel top. Traditionally they are made with blueberries, but since we grow such wonderful blackberries right here in the Rio Grande River Valley, it seemed only appropriate to adapt this recipe to include them.

Life As A Lavender Plant 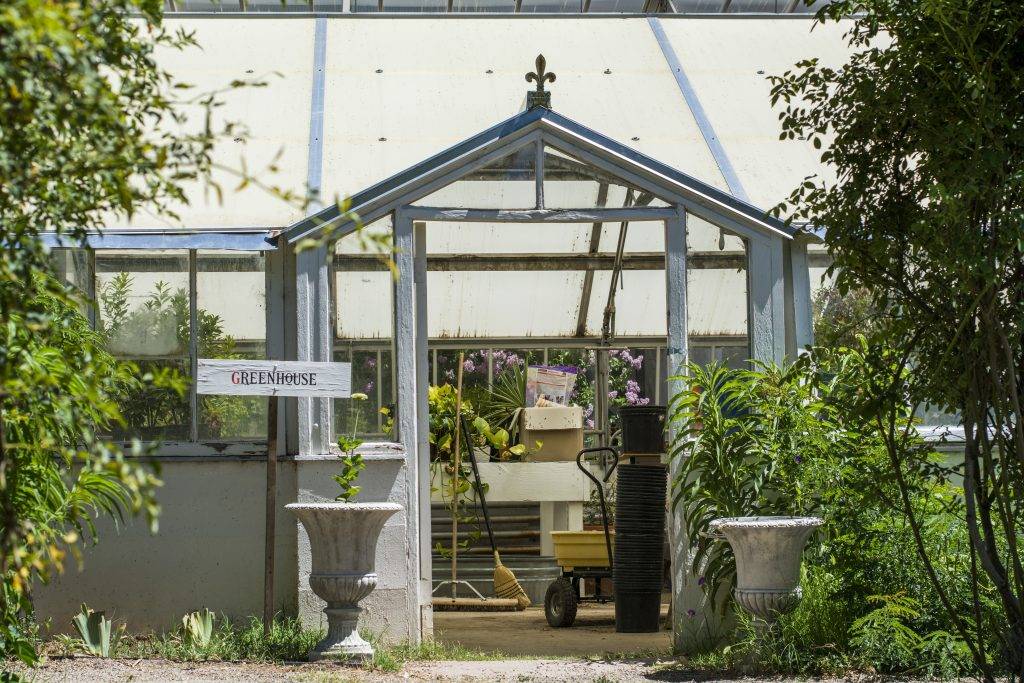 Lavender is near and dear to our hearts here at Los Poblanos. If you’ve been to the farm you have probably seen our 3 acre organic field filled with row upon row of our favorite botanical and maybe even purchased a product or two at the Farm Shop. What you perhaps haven’t seen is the full life cycle of our much-loved lavender plants. To us our plants aren’t just a commodity, they are living organisms that requires care, attention, and understanding. Each step in every plant’s life is incredibly important; from the initial propagation all the way through planting, growth, harvest, distillation, and finally incorporation into our lavender products. Our farmers work year round tending to the needs of our plants; protecting them for pests, weeding their beds, and making sure they have adequate water to cope with the heat of our high desert climate. 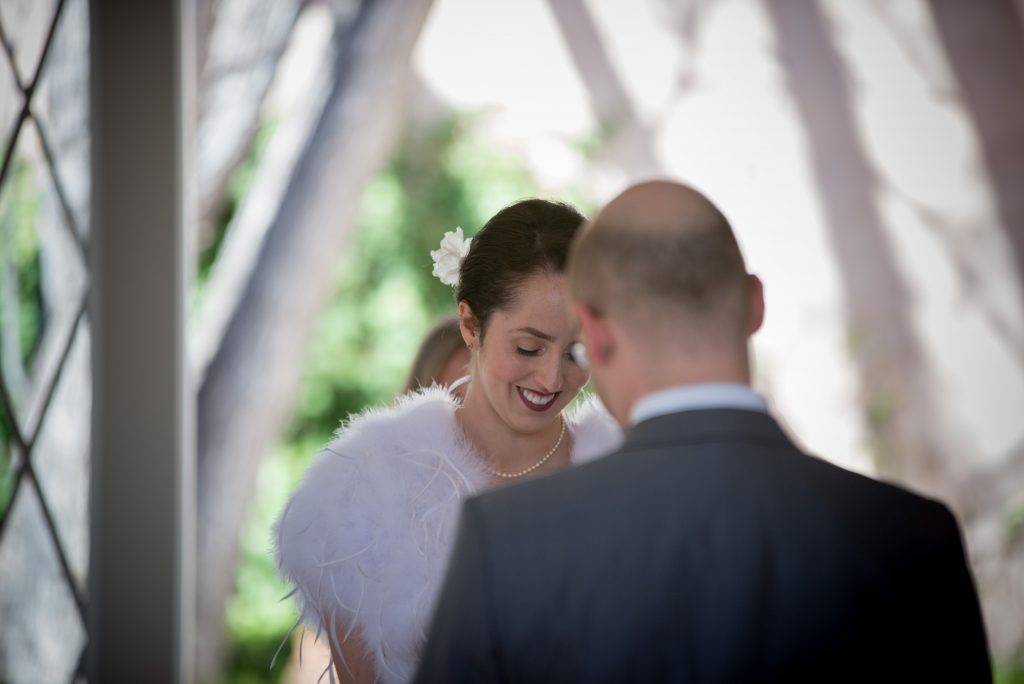 For Isabel and Simon, it all started with pizza. Now, pizza almost always leads to wonderful things, but for this lovely couple it was the catalyst for an amazing life full of love, partnership, good eating, and endless adventures. The story goes that Isabel found Simon on OkCupid and after much perusal of his profile, she sent a message off into the void, hopeful and intrigued. He didn’t reply. She could only assume that he wasn’t interested, as anyone might in such circumstances, but something – she’s still not quite sure what – made her send another message a few days later. This time, he answered quickly and so they began trading messages in earnest. She was abroad in Brazil at the time, so they were able to get to know each other through stories and photos before meeting in person. She says that early into their correspondence, she sent Simon a photo of her favorite pizza in Sao Paulo and that, as they say, “sealed the deal.” He knew instantly that he had found a woman who loved to think about food as much as he did, a trait that he sees as somewhat of rare treasure.  And so the scene was set for their epic love story.

Once Isabel arrived back home in New York City, she and Simon were finally able to go on their first date. They met up at a little restaurant in Greenwich Village where they talked and ate and talked and ate and talked some more until finally it grew late and they parted ways, both overstuffed and with an innate sense that this was the beginning of the rest of their lives together. Which of course, it was. Several months later they traveled back to Brazil to share the experience of eating the pizza (the one that started it all) together. The first of many food-driven travel adventures they would have.

Flash forward to the Forth of July 2015. They planned to have a day exploring the city which included watching the boat show down by the Hudson River. It was there by the water that he got down on one knee and asked Isabel to be his wife to which, of course, she said “yes.” The proposal set the stage for their next adventure together: wedding planning.

The Legacy of John Gaw Meem 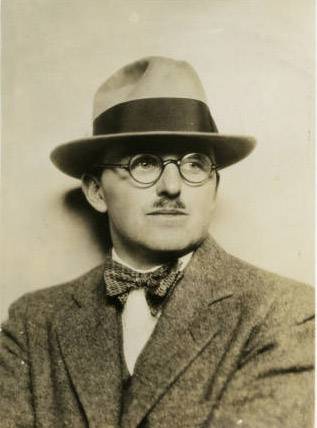 Many unique elements come together to make Los Poblanos into the captivating property that it is. The people, the agriculture, the land, and the history all shape the story-book setting of Los Poblanos; but perhaps the most distinctive feature is the architecture. Most notably the Historic Inn and La Quinta buildings designed by the legendary Southwestern architect John Gaw Meem.

Meem revolutionized architecture in the southwest by mixing progressive elements with well-known regional architectural styles. His understanding of natural elements along with stylistic inspiration built an internationally recognized aesthetic and functionality. The full courtyard ranch house, Los Poblanos Inn, and the entertainment building, La Quinta, are now home to our historic inn rooms and event center respectively. The elements in these spaces were designed by Meem to create both an elegant and nostalgic experience.

Field Notes from the Farmers 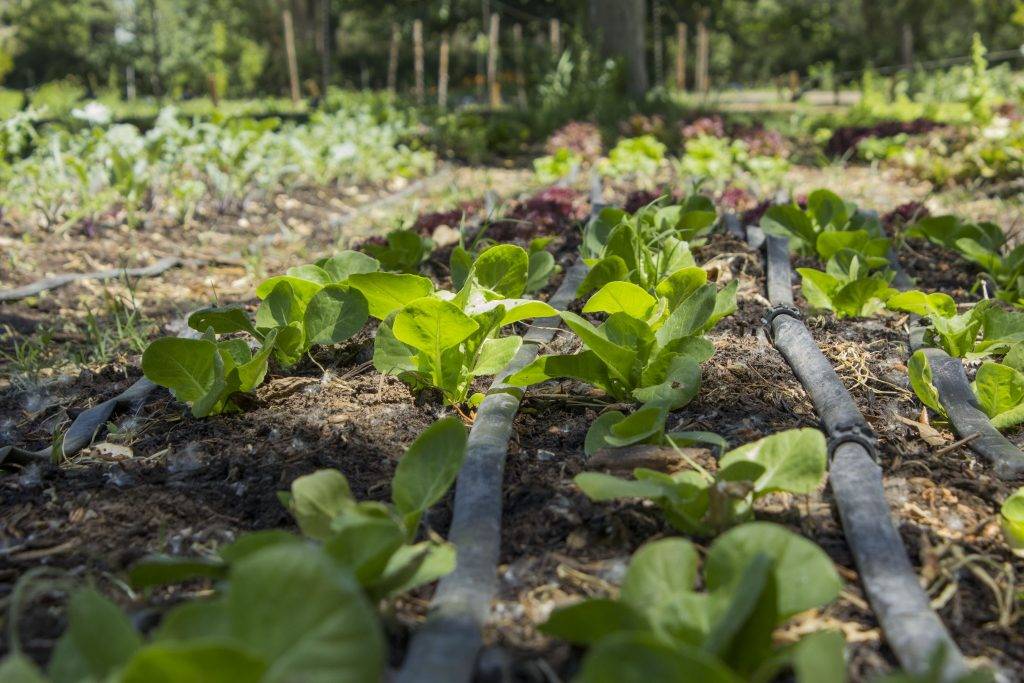 The fields at Los Poblanos are always in flux, changing and evolving with the seasons. Although we can plan as much as we want, ultimately the plants, the rain, and the sun will do just as they please. It is the job of our farmers to work with the whims of nature, adapting the plan as they go, in order to keep the farm alive, well, and productive. Each new season we like to check in with the farm team and see how they’re doing. These are the field notes from Farmer Travis and his team about what is changing, happening, and growing out there on the farm this summer: 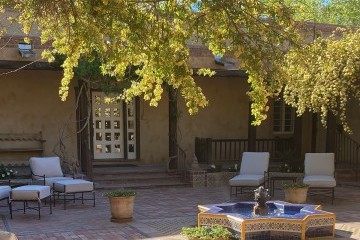 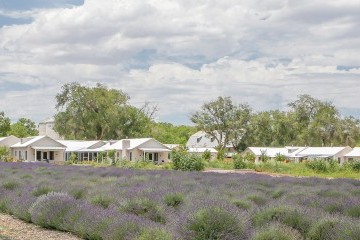 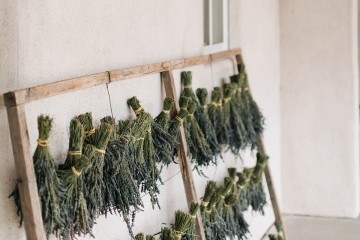 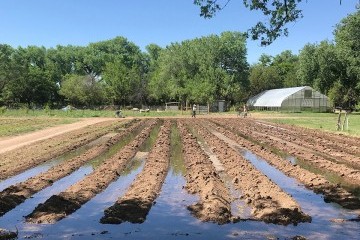 What’s Happening this Season on the Farm 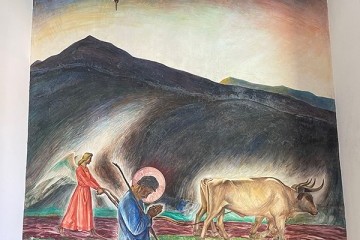